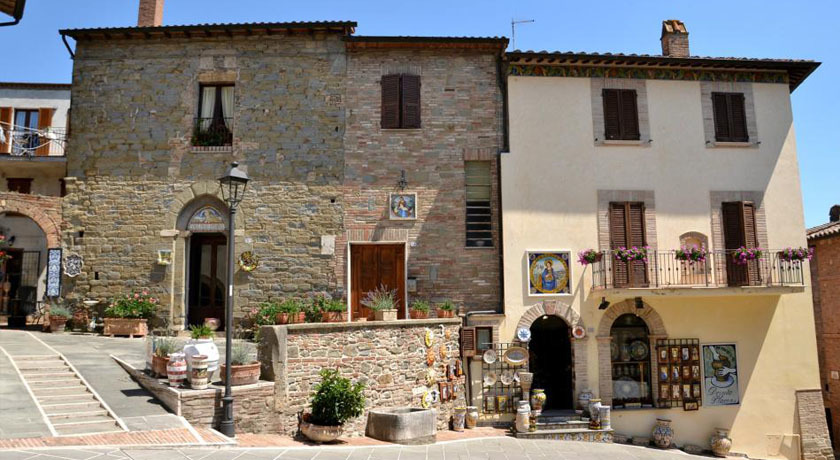 The origins of the town go back to ancient times. When Perugia conquered the territory in the 12th century, Deruta was transformed into a border fortress to defend Perugia against Todi and other potential enemies, but by the 13th century Deruta had its own statute and governed itself independently. The 14th and 15th centuries were periods of great upheavals with alternating dominations, destruction and large-scale plagues. Domination by the Baglioni family from Perugia in 1500 was the start of the reconstruction of most of the town and meant that Deruta was able to rise from its ashes.

During the Salt War in 1540, Deruta sided with the Roman Catholic Church, which went on to win the war and rewarded the town by exonerating it from paying taxes for many years. From that time on it was part of the Papal States until the Unification of Italy. From mid 1500 the town enjoyed a long period of peace that coincided with an all-time peak in majolica production that made Deruta famous all over the world.

The local clay was good for ceramics, whose production began in the Early Middle Ages, but found its artistic peak in the 15th and early 16th century, with highly characteristic local styles. In the 16th century Deruta produced the so-called “Rafaellesco” ware, decorated with fine arabesques and grottesche on a fine white ground. Deruta has over 200 ceramic workshops, most of which retail their own goods along with other retail shops which display and sell pottery products.

To be seen in the historical town centre is the San Michele Arcangelo city-gate, with traces of the ancient city walls to the sides. The polygonal fountain was constructed by the Quinqueviri, public bankers, in 1848. Piazza dei Consoli opens up shortly beyond and features the Palazzo Comunale, town hall, which houses the Art Gallery containing an important collection of paintings from the churches of San Francesco and Sant'Antonio.

In front of the municipal building is the church of San Francesco in Gothic style. Next to this is the ex-convent, founded in 1008 by Benedictine monks and later given to the Franciscans, where the magnificent ceramics from the archaic period to today can be admired. Noteworthy is the church of Sant'Antonio Abate that contains significant frescoes by Bartolomeo and Gian Battista Caporali.

In the vicinity the Santuario della Madonna dei Bagni can be seen, which contains an extraordinary collection of ceramic tile votive offerings made by the locals over the last four centuries. Worth a visit are Castellone and the ruins of the Casalina castle.